At last year’s IPCPR Convention & Trade Show, JRE Tobacco. Co. released a very interesting cigar it dubbed the Aladino Corojo Reserva. The interesting part was evident in its name, as the single vitola puro that was made up of 100 percent corojo tobacco sourced from Honduras. At that time, there was only one vitola—namely, a 5 x 50 robusto—that was packaged in a unique diamond-esque shaped box featuring a piece of art printed on the inside of the lid.

Fast forward to April of this year, when the company quietly shipped select retailers a brand new vitola in the Aladino Corojo Reserva line. As was the case with the robusto, the new 6 x 52 version is made entirely of Honduran corojo sourced from the Eiroa family farms. Priced at $14 each, the toro is a regular production release, albeit limited to 300 20-count boxes per month.

There have now been two different vitolas released under the Aladino Corojo Reserva line. 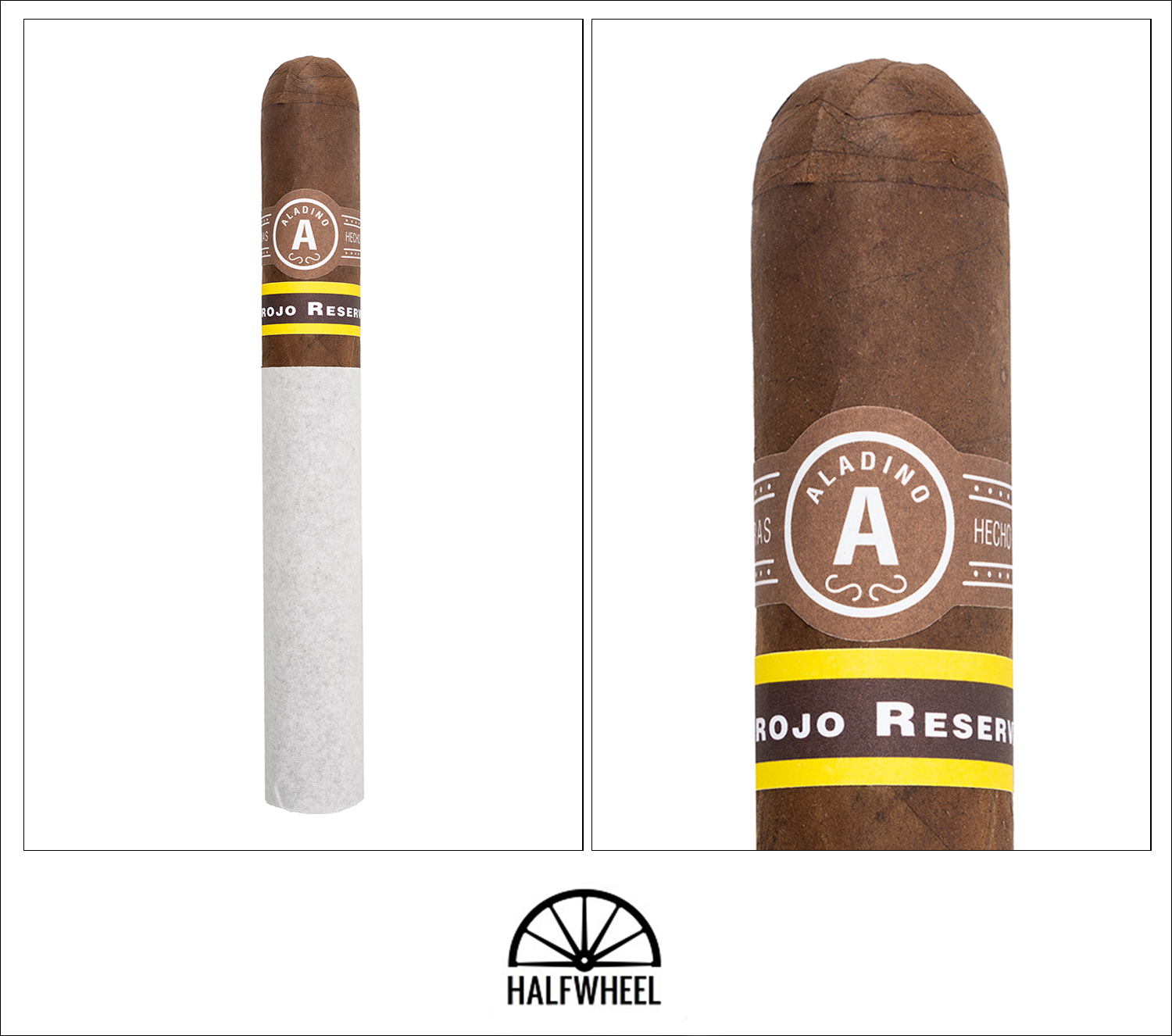 A paper wrap covers more than two thirds of the Aladino Corojo Reserva Toro, but removing it reveals a milk choclate brown wrapper that is exceedingly smooth to the touch, despite the lack of any discernible oil. What the cigar does have is plenty of small bumps as well as a few large veins, and it is nicely firm when squeezed. Aroma from the wrapper is a combination of sweet cedar, hay, popcorn, creamy nuts, earth and espresso beans, while the cold draw brings flavors of bitter dark chocolate, creamy leather, sawdust, peanut butter, bread and slight prune.

From the first few puffs, the profile of the Corojo Reserva Toro features flavors that will become very familiar, namely creamy peanut butter and creamy cedar, along with lesser notes of cocoa nibs, hay, leather, earth, roasted espresso beans and generic nuts. While there is black pepper present on the retrohale, it is not strong enough to overwhelm any other flavors, including some slight raisin sweetness that comes and goes throughout. Construction-wise, the draw is excellent after a simple v-cut while the burn is giving me no issues whatsoever so far. There is plenty of smoke flowing off of the foot and the strength is not exactly blowing me away so far, ending up at a point point between mild and medium by the time the first third comes to an end. The flavors of the Aladino Corojo Reserva change very little during the second third, meaning that same combination of creamy peanut butter and creamy cedar easily remains in the dominant spot. Other flavors of bitter espresso, leather, earth, hay and a touch of floral flit in and out as well, while both the black pepper and the raisin sweetness from the first third seem to be a bit stronger as well. Both the draw and burn continue to impress, and while the overall strength has increased noticeably, it still falls just short of the medium mark by the end of the second third. Unfortunately, the final third of the Corojo Reserva Toro is virtually indistinguishable from the second third: the same combination of cedar and creamy peanut butter dominant the palate, followed by other notes of coffee, barnyard, leather, dark chocolate, floral and a bit of cinnamon. The amount of both black pepper and raisin sweetness on the retrohale also fail to change in any drastic way, although I do notice a touch of spice on my tongue near the halfway point of the final third that came and went in a few puffs, never to return. Construction-wise, the draw remains as good as ever and although I have to touch up the burn once right near the end, it really was not that big of a deal. Finally, the overall strength does manage to reach a point just over the medium mark, but stalls out there, and I have about an inch left when I put the nub down. Even after all the years I have been smoking and reviewing, I can still be shocked at how a small change in length and ring gauge can change the profile of a cigar. As a blend, there is absolutely nothing wrong with the Aladino Corojo Reserva Toro: it is full of woody, peanut buttery and slightly sweet flavors, while the construction was quite good across three samples. The problem is that unlike the Robusto vitola, it has virtually no transitions at all, leading to a profile that becomes fairly monotonous about halfway through. There is something to be said for consistency—something that this cigar has in spades—but at the end of the day, if you are looking for more complexity in a blend, smoke the robusto vitola.