In one of the longest build-ups of a new cigar release in recent memory, news of JRE Tobacco’s new Aladino Maduro began to surface in mid-April, with Justo Eiroa, president of JRE Tobacco Co., confirming to halfwheel that the cigar was indeed in the works as a follow-up to the original Aladino, which launched in 2015.

While it would have seemed that the Aladino Maduro would have been on display at the 2017 IPCPR Convention & Trade Show, it wasn’t, with the only “new” thing on display being revamped packaging for the original Aladino line, with a piece of Cuban artwork replacing the original design on the inner lid.

As the weeks after the trade show turned into months, there was some wonder as to when, or if, the Aladino Maduro would begin shipping. The answer came in late October and early November as it began soft launching in four sizes initially, with the potential for a gordo to be added:

Pricing has not finalized and will likely be settled by February 2018, with the numbers above representing the higher of the estimated price range. While the gordo hasn’t been completely ruled out, Justo Eiroa said it is not in the company’s current plans, though he called it an important vitola that “cannot be discarded for the future.”

Now, you may notice that there’s not a Rothschild listed above; the reason for that is fairly simple. While the cigar was released to at least some of JRE’s accounts, it isn’t one that is part of the core line. “My dad, Julio, made some Rothschild’s since he likes that particular size,” Eiroa told halfwheel. He noted that the company is focusing on the other four sizes as they believe they are more popular for the current market. The Aladino Maduro Rothschild has an evenly tanned cocoa colored wrapper that is dry to the touch but shows a bit of oily sheen, along with small veins and a good bit of tooth that translates into a fine grit texture on the fingers. The roll is quite clean with flat, invisible seams and good cap application, though I see a bit of binder peeking out from the foot of the cigar on the first and third samples. Aroma off the foot is very neutral, reminding me of chocolate chip cookie dough with just a bit of sweetness that varies based on how buttery a particular cigar’s aroma is. The cold draw errs to the tight side of ideal, with air flow marked by more of the cookie dough and again, variable butteriness.

Pepper is the first thing that comes across from the Aladino Maduro Rothschild once the foot is toasted and the cigar begins burning; I’m most interested to see just how well the Honduran and Mexican San Andrés tobaccos interact with each other, though out of the gate neither stands out. There’s an interesting sweetness that begins to emerge at the half-inch mark, nearly identical to the cookie dough smell from the foot but a bit warmed and now much more vibrant, with chocolate standing out on the third sample in both chip and syrup form. The first clump of ash drops off unceremoniously and shatters as it hits the chair’s armrest, with the burn line about as even as you could want. Pepper begins to take over the profile, and my curiosity about which country’s soil will dominate seems to be close to getting an answer. Honduran terroir is the first to emerge, as the second third begins with a bit of the familiar soil note and an increasing amount of pepper, particularly through the nose. The burn line is moving rather quickly, and the cigar almost never stops putting off smoke, even while awaiting its next puff as it rest on the ashtray. Speaking of the burn line, it’s worth keeping an eye on to see the toothiness of the wrapper emerge via clumps of small white bumps. That increasing amount of pepper begins to get to the back of the throat, though the cigar itself stays fairly medium-bodied with an underlying nuttiness taking the reins from the Honduran terroir. The aroma has a very pleasing sweet and savor aspect to it, similar to warmed nuts, with cocoa powder making the occasional appearance in the aroma. Retrohales continue to offer the most oomph out of the Aladino Maduro, readily accessible should you want black pepper to increase the strength of the smoke. The flavor heading into the final third becomes fairly dry, as the more prevalent earth seems to beg for any moisture it can find. Combustion and burn are still excellent, with a slightly wavy burn line the only notable flaw. 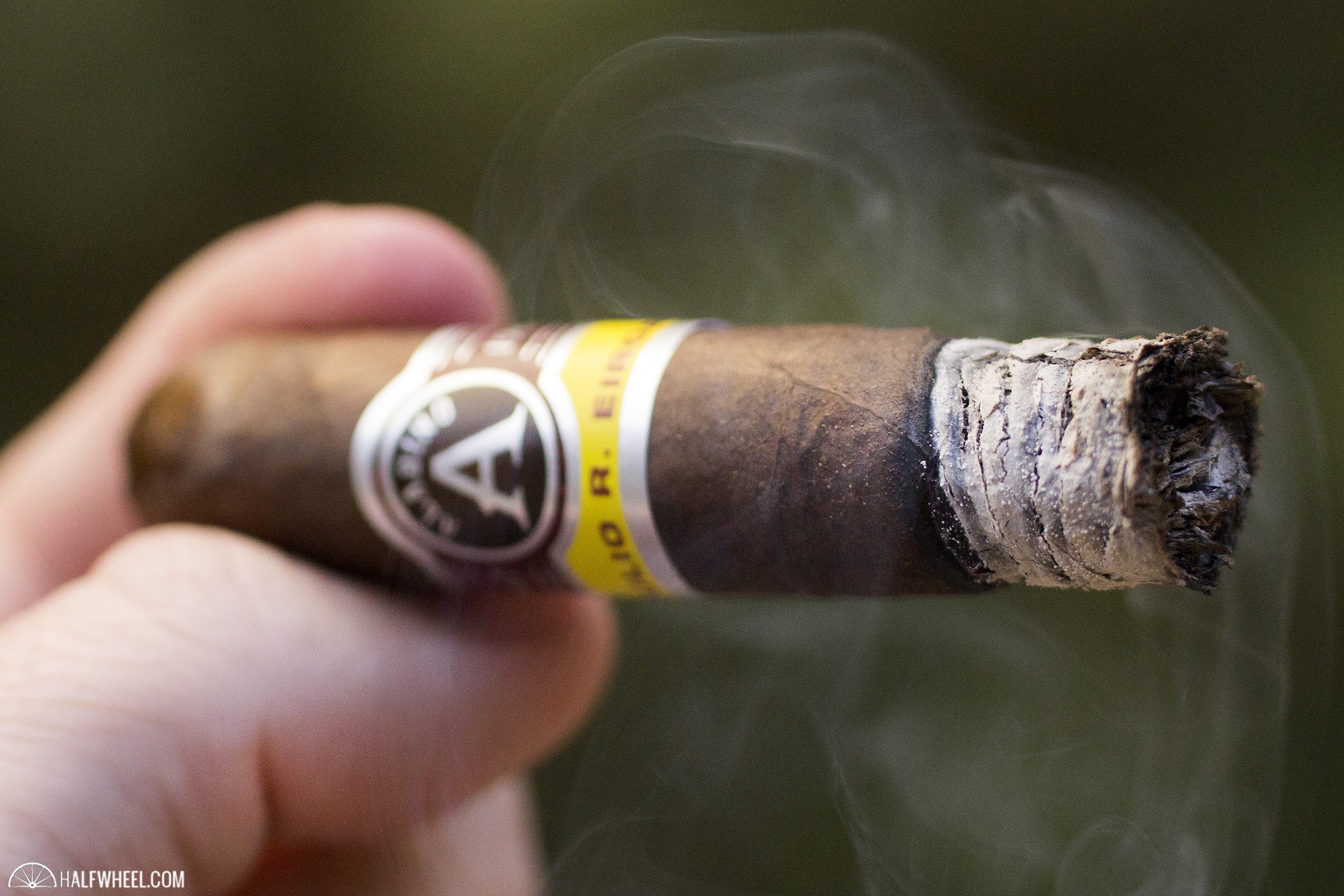 While the Honduran terroir kicked off the second third, it’s the Mexican San Andrés’ turn at the start of the final third, with a chocolate undertone providing the launching pad for medium-strength earth and complementary pepper. Despite the shift, the Aladino Maduro Rothschild stays along much the same course that it has laid prior, with pepper a dominant note over earthy, chocolate accents. The cigar has shed a bit of its dryness, a steady change that doesn’t become immediately noticeable until the final puffs, but which is evidenced by my reaching for a glass of water much less frequently. The burn continues to be quite good, and it’s easy and worthwhile to take the cigar down to a tiny nub of unburnt tobacco, with no shyness needed to employ a draw poker or toothpick. I hate to say that tobacco from certain countries can be polarizing, but it seems that I’ve come across a number of people who either love or hate both Honduran and Mexican tobaccos. Bring them together and it seems to be a recipe for either a smash or an absolute bomb; for me, it’s the former. There wasn’t a moment I didn’t enjoy the cigar, with each sample remarkably consistent. The duality of the terroir is noticeable and appreciated, the pepper-forward profile is clean and direct, and the construction is as good as I can recall. This won’t be for everyone, but if you’ve gravitated towards the tobaccos from these two countries, you should most certainly gravitate towards the Aladino Maduro.